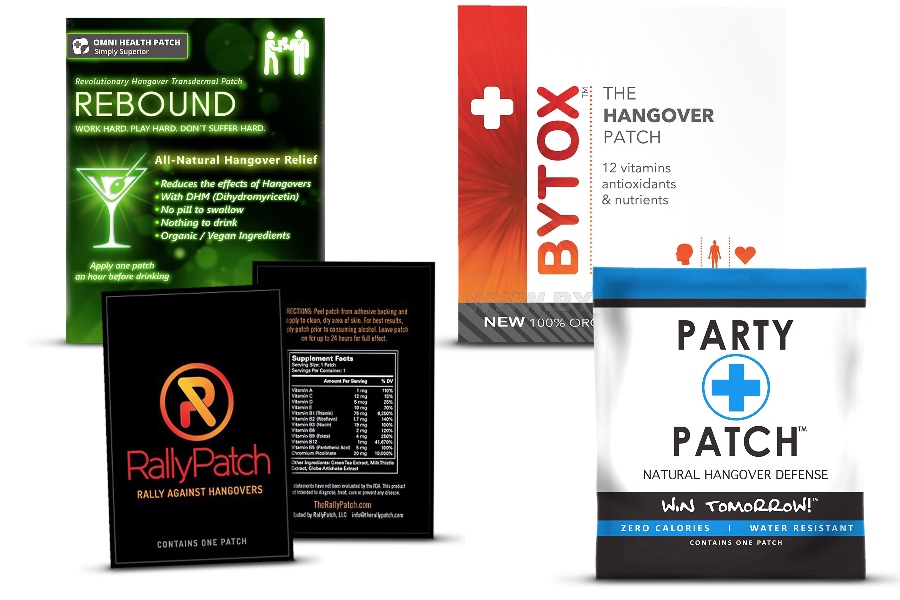 Hangover patches are a relatively new kind of supplement designed to mitigate the negative effects of drinking alcohol.

They work by supplying nutrients through your skin directly to the blood vessels underneath for rapid absorption.

With so many options nowadays, we thought it’s a good time to review the best hangover patch on the market today.

We’ve based our review on factors such as company reputation, customer reviews, value for money, and most importantly effectiveness based on their ingredients formula.

Generally speaking, we personally prefer hangover supplements in pill and drink form because they deliver higher doses of ingredients and, therefore, are more effective.

Nevertheless, if you prefer going for a hangover patch, this article is for you.

How do hangover patches work?

To understand how hangover patches actually work, we first need to go over what causes hangovers in the first place.

Firstly, alcohol is a diuretic which means it makes you lose more water than the fluid you are consuming. Consequently, this leads to a net loss of fluid which can leave you dehydrated.

Aside from this, the metabolism of alcohol produces toxic waste products such as acetaldehyde.

Acetaldehyde breaks down to form free radicals that react with your cells leading to inflammation.

This process can be linked to some of your common hangover symptoms including muscle aches, headache, and general lethargy to mention a few.

Your liver produces antioxidants that neutralize free-radicals. You can also get antioxidants from the food you eat.

During periods of over-indulgence, the number of free-radicals produced far outweighs your antioxidant levels.

This is where hangover patches come into play by trying to replenish antioxidant stores to support normal liver function.

Now that we’ve got the science out the way, let’s look at the top ingredients to look out for in a hangover patch.

What are the key ingredients to look for in a hangover patch?

The top hangover patches normally contain a mixture of vitamins, amino acids and herbal extracts that have antioxidant properties.

There’s a lot of hype around DHM because of recent research which showed it can increase alcohol metabolism and reduce intoxication in mice. As a result, most of the top hangover supplements on the market include it in their formula.(1)

Ginger is a natural anti-sickness remedy and we always like to see if included in a hangover patch.(2)

This amino acid is found in high concentrations in green tea. It’s said to increase brain alpha waves which induce a sense of calm.(3)

The B-Vitamins are essential co-factors in alcohol metabolism. Pretty much all hangover patches will include a selection of them.

Prickly pear is high in polyphenols which are powerful antioxidants. Some research has also shown it to significantly reduce hangover symptoms.(4)

If you know about natural hangover remedies, you’ve probably already tried milk thistle in the past. It’s known for its anti-inflammatory and antioxidant properties.

Some hangover patches include a dose of caffeine to keep you stimulated. However, this isn’t ideal because it will increase your heart rate unnecessarily and distrust your sleep.

It’s hard to find a supplement without using a proprietary blend nowadays. These are used by manufacturers to cut costs. The downside is that they are able to present the ingredients formula as a “blend” and not show exact doses.

How do you use hangover patches?

All of the hangover patches mentioned in this article are meant to be applied just before you start drinking.

The reason is, the ingredients from the patch need to work as soon as the toxic by-products of alcohol are produced.

If you end up using it the day after when you’ve already woken up hungover, it’s way too late.

Unfortunately, by this stage, the damage is already done and time will be your only healer.

So now that we’ve got the basics out the way, let’s get straight into our pick of the best hangover patches on the market today.

We’ll mention again that hangover patches, in general, aren’t as good as other hangover pills and drinks. So, if you’re thinking of investing in one, follow the link below to see what else is on offer first. 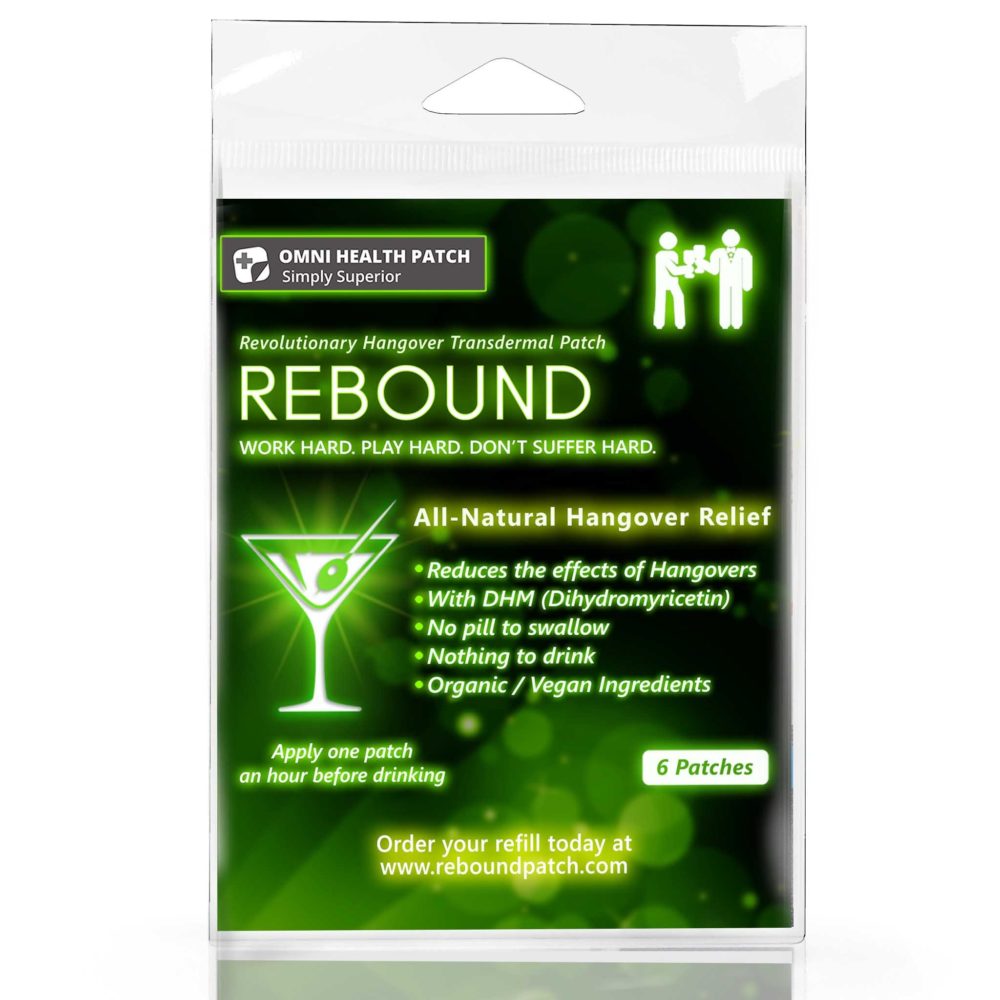 Rebound patch is the only one that contains over 15 ingredients. This includes DHM, prickly pear, ginger, turmeric, B-vitamins and more.

Out of the patches mentioned in this article, it has by far the most extensive formulation which matches some of the top hangover supplements.

Pricing
6 patches cost $9 from their website which means that each night out comes to around $1.50.

Out of the hangover patches on the market today, Rebound patch has the most comprehensive formula and we rate it as the best hangover patch. In addition, it’s by far the cheapest and therefore, good value for money. 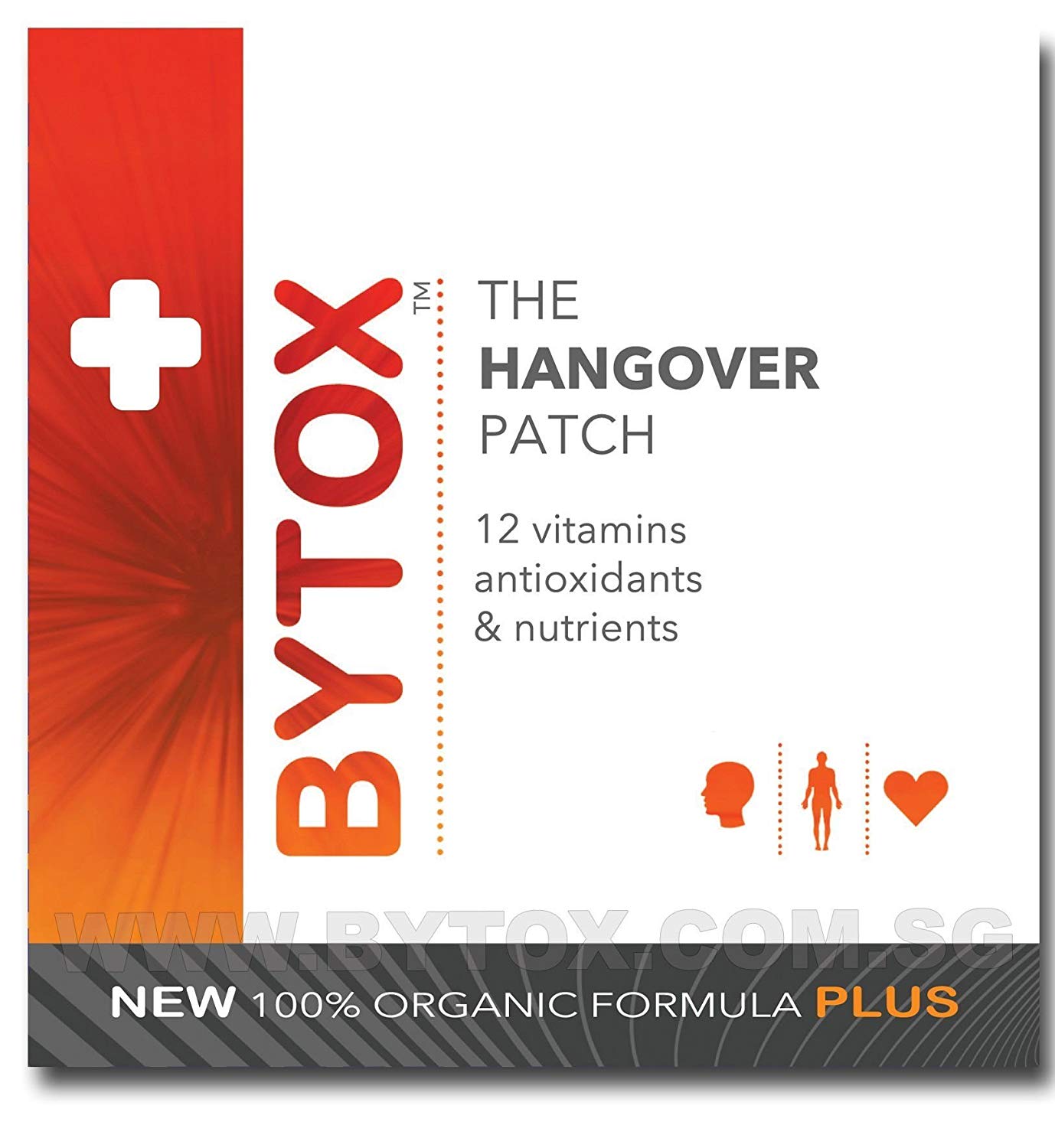 Bytox is probably one of the most well-known and popular hangover patches on the market. It contains B-vitamins and some antioxidants like acai berry and vitamin E. There are some ingredients like vitamin D included which probably have no effect on hangovers.

Bytox does not use a proprietary blend which is good to see.

5 patches cost $15 so it works to $3 per night out. Therefore it’s average priced compared to its competitors.

Bytox patch is a veteran hangover supplement but with a strong reputation and brand. 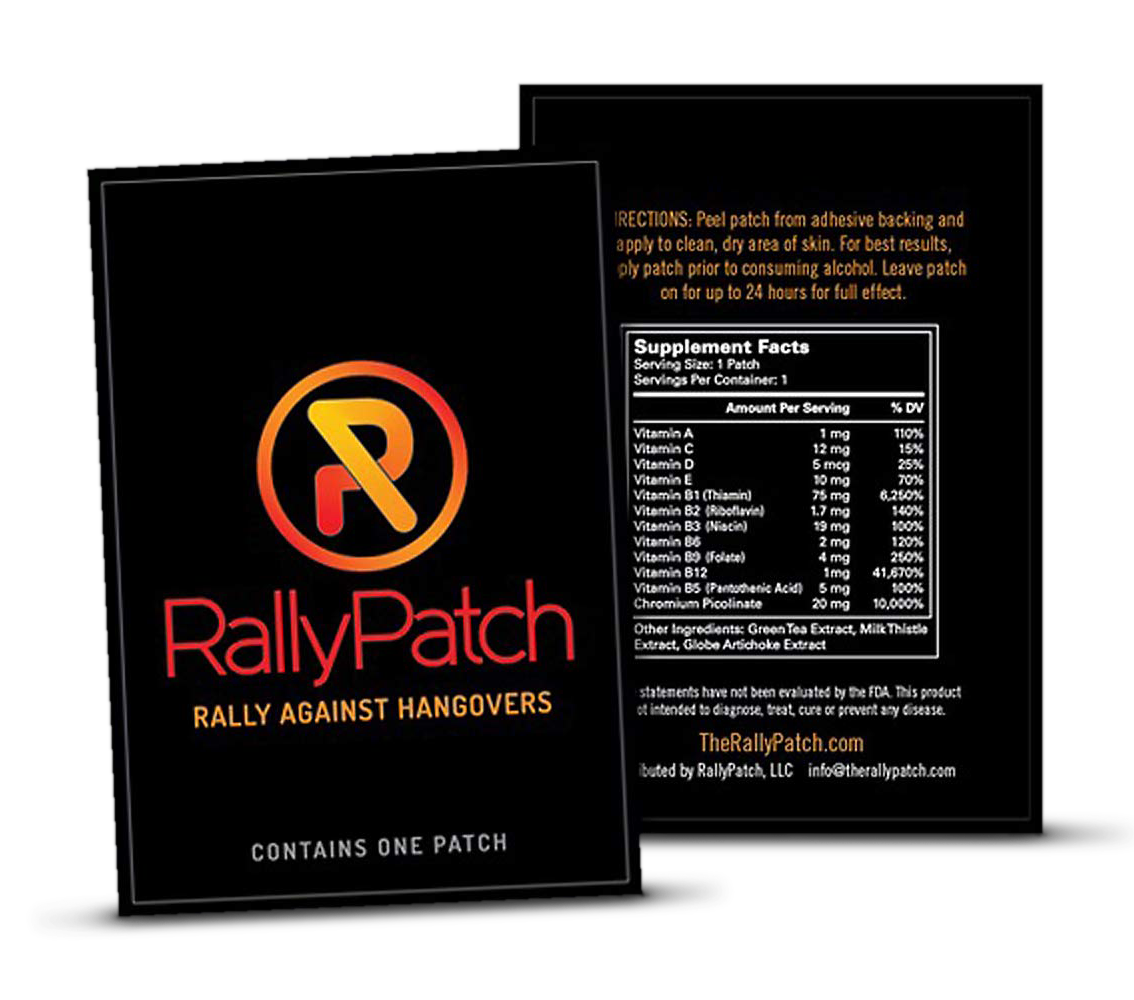 Rally patch has similar ingredients to Bytox with added milk thistle which is good to see. They also have artichoke extract which works similar to milk thistle. However, a study looking at artichoke in hangovers found it not to be effective.

A 5 pack of Rally Patch costs $20 making it $4 a patch. Therefore it’s the most expensive product in our list.

Rally patch has a decent selection of ingredients but may not suit everyone’s budget. 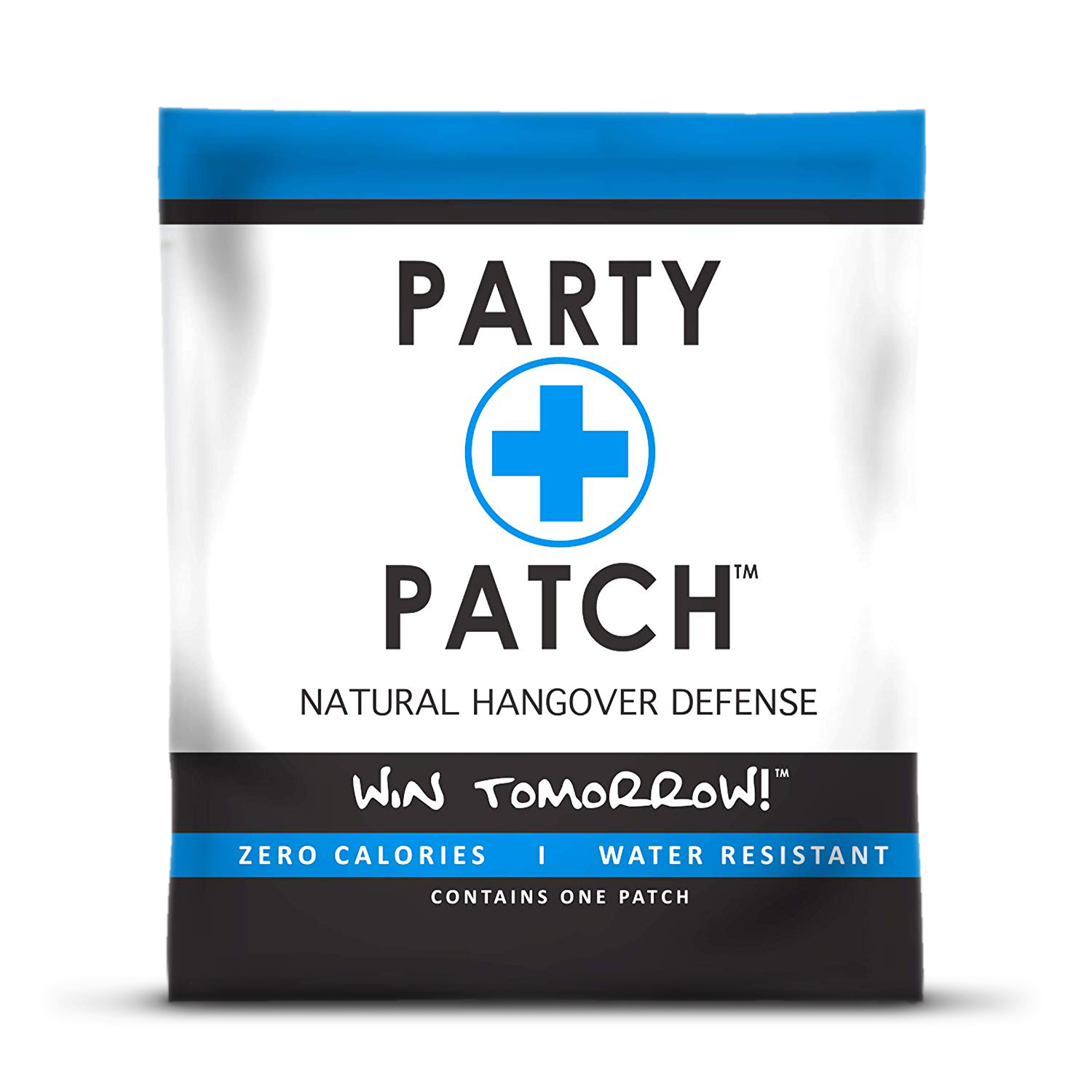 Party patch has a few solid ingredients and costs just under $20 for 4 patches. That means each patch costs around $5. Therefore it’s at the higher end in terms of price.

That brings us to the end of our look into the best hangover patch on the market.

If you’re interested in other hangover products, follow the link below for the best hangover pills on the market right now.