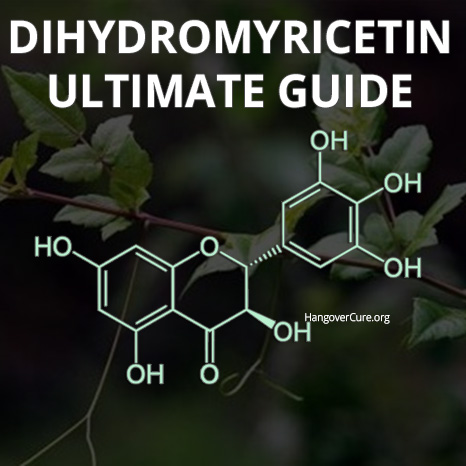 Dihydromyricetin or DHM is extracted from the Japanese raisin tree and has been used for centuries in traditional Asian medicine as a treatment for hangovers and liver disease.

In this article, we’re going to take a close look at everything you need to know about Dihydromyricetin, including what the research has shown and whether it actually works.

What is Dihydromyricetin (DHM)?

DHM is the active ingredient extracted from the Japanese raisin tree – otherwise known as the Holvenia Dulcis.

Other sources of dihydromyricetin include other plants such as Chinese Vine Tea.

Another common name for DHM is Ampelopsin.

With so many names, it can all get a little confusing so we’ve laid it out simply:

Originally a Chinese herbal tea, dihydromyricetin has been taken for centuries as a hangover cure and headache healer in rural villages.

It’s a flavonoid which is thought to have powerful anti-inflammatory and antioxidant properties.

Scratching your head? Let’s put that in terms we can all understand, and look at how dihydromyricetin works for hangovers, liver health, and more.

The original studies were performed whilst trying to develop a potential solution to Alcohol Use Disorder (AUD), commonly called alcoholism, where the symptoms involve repeated alcohol use leading to tolerance and alcohol withdrawal syndrome.

Liang and her research team first tested whether Dihydromyricetin blocks the clumsiness and loss of coordination caused by drinking too much.

The rats were injected with high doses of alcohol to make them drunk.

And their results were pretty interesting:

1) Dihydromyricetin prevented intoxication:
When DHM was mixed into the alcohol solution, they found that the rats didn’t get drunk in the first place.

How did they know they were drunk?

Well, they tested the “Lighting reflex”. The rats have a natural reflex to flip from their back to front when placed down this way. So the researchers set the bar at the point when the rats stopped doing this flip.

2) Dihydromyricetin increased alcohol breakdown:
The researchers tested the rat’s blood at intervals after giving alcohol with and without DHM. They found that when they gave DHM with alcohol, the rat’s blood was clear from alcohol much faster.

3) Dihydromyricetin made the rats want less alcohol:
They found that when DHM was given with alcohol, the rats naturally didn’t go after more alcohol to get more drunk. Whereas without the DHM, they seemed to like the effects of alcohol and go after it more.

More research has been carried out on the extract since Liang’s studies and the findings are even more impressive: it turns out that dihydromyricetin has hepatoprotective properties This means that DHM has the ability to reduce the amount of liver damage caused by alcohol.(2)

So now that we’ve got some of the science out the way, next we’ll look at whether DHM works for hangovers.

Dihydromyricetin as a hangover cure

To understand the way Dihydromyricetin may help in preventing the negative effects of alcohol, we must first go over how your body processes alcohol.

When you drink, alcohol enters your bloodstream through the stomach and intestines. Your blood is then filtered through the liver, where alcohol is broken down (metabolized) to produce energy.

This process produces a toxic byproduct known as Acetaldehyde. Acetaldehyde is up to 20-30 times more toxic to your body than alcohol because it is unstable and reacts with the cells it comes into contact with.

In normal circumstances, your liver clears acetaldehyde before it causes too much damage. The problem is, your liver is only capable of breaking down alcohol and acetaldehyde at a certain rate. That rate is typically around 1 drink per hour (but this depends on factors such as height, weight, age, and gender).

The research suggests that DHM improves the ability of your liver enzymes to break down alcohol. Hence why dihydromyricetin is thought to help reduce the symptoms of a hangover by reducing the build-up of acetaldehyde.

We all know that feeling after a night of drinking where you wake up to 100 messages of what happened the night before, and your memory is patchy at best.

On top of that, the alcohol you’ve had is making you feel a little more delicate than usual and your anxiety levels are peaking.

Well, Dihydromyricetin has been shown to potentially help reduce these symptoms.

When you drink alcohol, brain activity is suppressed. This means that the main neurotransmitters that keep you alert are all subdued. namely GABA and Glutamate.

When you wake up the next morning, the alcohol is out of your system (hopefully), so your brain is firing on all cylinders trying to catch up with the events from last night.

In fact, Its fired up more than it was the day before. This is known as the alcohol rebound effect. This rebound effect is thought to be one of the reasons behind hangover anxiety.

Dihydromyricetin was found to suppresses the rebound effect of alcohol by slowing down GABA and Glutamate. Therefore, there are some suggestions it may be useful in treating anxiety. (3)

This effect of DHM was powerful enough that researchers believe DHM may have promise as a treatment for the more severe alcohol withdrawal symptoms suffered by alcoholics attempting to kick the habit. But of course, a lot more research is needed before scientists can come to this conclusion.

DHM has been shown in research studies to protect against alcohol-related damage to the liver, meaning it has hepatoprotective qualities.

One study, headed up by a researcher named Jian Xi, used Hovenia Dulcis on chronic alcohol-induced liver damage in mice and showed that dihydromyricetin significantly protects against liver damage.(4)

It’s important to mention that these are preliminary studies on mice and therefore can’t be directly transferred to real effects in humans.

There have been no dihydromyricetin tests specifically looking at the side effects when consumed by humans.

That being said, there are several insightful studies looking into the benefits have concluded that overall: dihydromyricetin is probably safe for humans to use. It’s been used in traditional medicine for years.

As with all supplements, you should discuss with your doctor whether its the right thing for you. Herbal supplements can often interact with the medications prescribed by your doctor.

What is the recommended dosage?

The simple answer is – There isn’t one really.

Most hangover cure products containing dihydromyricetin use a dosage around 300mg.

In one particular study, up to 50mg/kg of dihydromyricetin was given to rats and found to have no negative side effects. This scales up 3500mg for a person weighing 165lbs (75kg).(5)

You can purchase high doses of dihydromyricetin online, but the safety at these levels hasn’t really been tested.

Is it better to take Dihydromyricetin as a drink, pill or patch?

The absorption of DHM from your intestines into your bloodstream is generally low. There arent many studies looking at how much DHM is actually absorbed but one has shown that factors such as stomach acidity can make a difference.(6)

Unfortunately, this is not something you have control over.

The delivery of DHM from a patch is low because the DHM doses in hangover patches are usually small.

DHM in drink and pill form are likely to give similar results and even though most companies claim theirs is the best, we don’t have concrete evidence to say which one is superior.

So personal preference is the best way to decide which form of DHM is best for you.

Where to buy Dihydromyricetin

You can buy Dihydromyricetin as a single ingredient or in combination supplements.

Your safest bet is to purchase from reputable companies such as AfterDrink, Flyby or Cheers which feature in our list of the best DHM containing products.

Other options include buying directly from DHM producers on platforms such as Alibaba. However, the purity may be questionable

Are there any reviews?

Apart from the studies and product sources mentioned in this article, Dihydromyricetin is included in most hangover pills nowadays.

In fact, most of the hangover supplements on the market today build their product formulation around DHM.

A quick search on sites like Amazon will show thousands of positive reviews for hangover supplements.

That said, everyone is different, and some won’t see any benefit. It may be more effective for some people over others. This is just the reality with any herbal product. 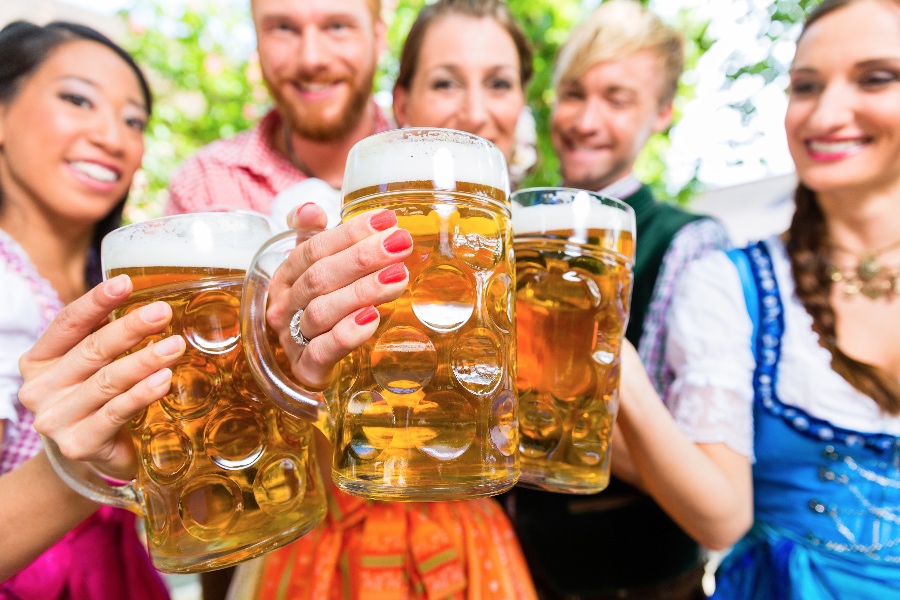 That brings us to the end of our look into Dihydromyricetin. It’s a natural ingredient that’s been used for thousands of years in traditional Asian medicine, but only recently utilized in supplements.

It’s important to mention that there are only a few research studies looking into DHM’s beneficial properties. Therefore, more needs to be done to confirm its efficacy.

You can check out our top pick of DHM containing supplements by following the link below.

2) Hase K. “Recent Update on the Pharmacological Effects and Mechanisms of Dihydromyricetin” Frontiers in Pharmacology (2018).

3) Zhaoxiang R. “Dihydromyricetin exerts a rapid antidepressant-like effect in association with enhancement of BDNF expression and inhibition of neuroinflammation” Psychopharmacology (2018).