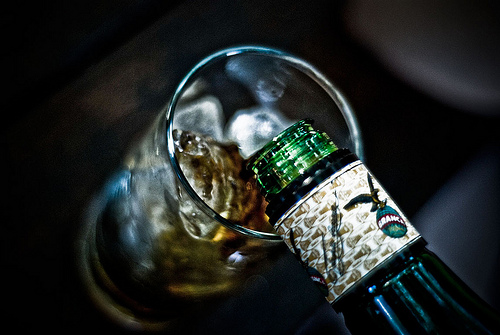 The folks over at Vice media have uncovered some brilliant research about a hangover fighting pill concept:

Everyone has a favorite, sworn-by method. A full glass of water before bed. Coconut water in the morning. A greasy plate of bacon and eggs with coffee. A traditional Mongolian method is said to involve pickled sheep eyes in tomato juice. And, of course, there’s always the hair of the dog.

Any of these things may help cure a hangover, each for its own reason. But engineers at UCLA may have discovered a way to cure hangovers a bit more scientifically. Forget those “hangover cure” cocktails of vitamins, aspirin, and herbal supplements bodegas sell by the register. The method discovered by these scientists uses enzymes to mimic the way your liver breaks down alcohol naturally.

As described in a paper published earlier this week in Nature Nanotechnology, a group led by Yunfeng Lu, a professor of chemical and biomolecular engineering, said the enzymes could one day be turned into a pill—used not just to cure hangovers, but “as a preventative measure or antidote for alcohol intoxication.” In other words, it might just help you sober up if you have to drive home—or, say, put on a good late-night performance.

A press release, revealed alongside the study, explains how the enzymes work:

Naturally occurring enzymes within cells often work in tandem to transform molecules or eliminate toxins. Lu’s group assembled multiple enzymes to mimic the natural process. An enzyme known as an alcohol oxidase, for example, can promote the oxidization of alcohol but also produces hydrogen peroxide, which is toxic. Another type of enzyme, a catalase, prompts the decomposition of hydrogen peroxide into water and oxygen. Placing the two enzymes next to each other can effectively remove alcohol.

The team of scientists assembled the enzymes in small capsules designed to mimic small structures in cells that protect the enzymes, but are thin enough to allow them to interact with alcohol molecules.

Tested on mice, the enzymes made a significant difference in the way they metabolized alcohol after administered alcohol. After 45 minutes, the test group registered blood alcohol levels 15.8 percent lower than their control group counterparts. After three hours, there was a nearly 35 percent difference!

Results were similar when the enzymes were administered at the same time as alcohol, like a prophylactic measure against getting too drunk.

Once it’s human-ready, it could provide a good method for keeping up with a seasoned boss/co-worker at happy hour while also keeping on your toes.

UCLA scientists and the US Food and Drug Administration need to develop this into a consumer-grade pill as soon as possible!