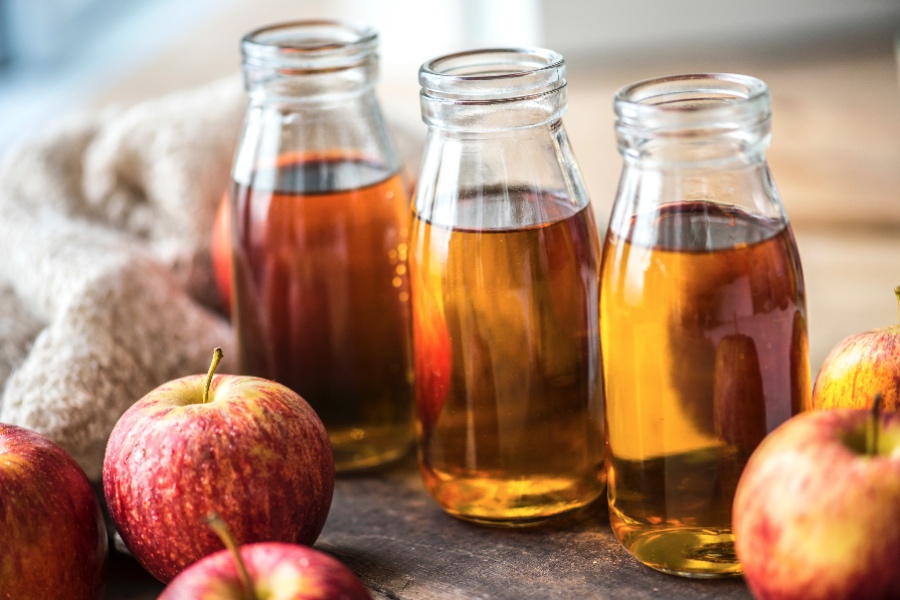 Apple cider vinegar has many perceived health benefits such as lowering blood sugar and cholesterol levels, as well as being anti-bacterial.

There are so many food fads nowadays that it’s hard to tell if any have actually proven benefits.

In this article, we’re going to take a closer look at what apple cider vinegar is, as well as seeing if there’s any science behind it’s proposed health improving properties.

In particular, we’re going to focus on whether apple cider vinegar can help with hangovers.

What is apple cider vinegar?

Apply cider vinegar is made by fermenting apple juice.

Firstly, yeast is added to apple juice which breaks down the sugar in it to alcohol.

Secondly, bacteria are added to the mixture which breaks down the alcohol to form acetic acid.

acetic acid is what makes vinegar.

Therefore, apple cider vinegar is a vinegar made from the sugar of apples.

How is it different from other vinegar?

Well, other kinds of vinegar are made from different sugar sources. For example, balsamic vinegar is made from grapes.

How to use apple cider vinegar for a hangover?

For those that take apple cider vinegar as a hangover cure, it’s usually done by having two or three tablespoons of it in the morning when you wake up.

A word of warning, it doesn’t taste good at all. It’s basically acetic acid, therefore it’ll be sour and acidic if taking it straight.

Some people mix it with a glass of water to dilute its strength down a little to make it more palatable.

Does apple cider vinegar have any health benefits?

A quick search online will uncover several different health benefits with apple cider vinegar. Aside from a hangover cure, it’s said to:

Acetic acid in vinegar is known to reduce the absorption of sugars and slow digestion. In one study, subjects took two tablespoons of apple cider vinegar at night and found a small reduction in blood sugar levels.

2) Helps weight loss
Because of the fact acetic acid slows down absorption, it’s also thought to make you feel full for longer.

Therefore reducing the number of overall calories you eat. Studies have shown that taking apple cider vinegar daily can reduce your calorie intake by 200 a day.

3) Lowers cholesterol
Some studies have shown a link between reduced cholesterol levels and vinegar consumption. But the evidence is limited.

Overall the evidence for the benefits of apple cider vinegar is poor and research has only shown a small difference.

A review of the literature shows no decent studies linking apple cider vinegar with benefits for hangovers.

That being said, you’ll find plenty of blogs claiming that apple cider vinegar cures their hangover.

To understand whether apple cider vinegar helps hangovers, we first need to go over how hangovers affect your body in the first place.

Alcohol is broken down by your liver to produce a toxic by-product known as acetaldehyde. Thi s is then broken down further into acetic acid.

Remember acetic acid is what apple cider vinegar actually is. So it’s essentially one of the end products of alcohol metabolism.

Most of your hangover symptoms are actually caused by the build-up of acetaldehyde (the stage before acetic acid is made). This is a highly reactive substance which causes damage to the cells it comes into contact with.

Your liver is only able to convert acetaldehyde to acetic acid at a certain rate (usually equivalent to one drink per hour). Therefore, any more than this and you get a backlog of acetaldehyde which wreaks havoc on your insides.

When this happens, antioxidants come to the rescue and neutralize acetaldehyde before it causes too much damage.

Now that we’ve got the science out the way, we can come back to the question of whether apple cider vinegar cures hangovers?

Unfortunately, there’s no scientific basis for this as apple cider vinegar is basically the same as the end product of alcohol metabolism – which is acetic acid.

Are there any benefits of apple cider vinegar for hangovers?

High alcohol intake is associated with a drop in blood sugar levels. Some people take apple cider vinegar to stabilize this effect.

Low blood sugar levels can explain why hangovers are associated with low energy and a lack of focus.

Are there any side effects taking apple cider vinegar for a hangover?

Drinking alcohol is known to increase stomach acid production. This is because alcohol is thought to activate acid-producing cells in your stomach lining.

As a result, alcohol can often leave you feeling nauseous with indigestion.

Apple cider vinegar is an acid, therefore it can further acidify your stomach contents and worsen these symptoms.

Also, the fact that it has a strong bitter taste doesn’t help.

That brings us to the end of our look into apple cider vinegar and whether it works as a hangover cure.

Apple cider vinegar is just acetic acid made from the sugar of apples.

There is very limited evidence of any general health benefits. and when it comes to hangovers, there is even less.

In some cases, apple cider vinegar can make your hangover symptoms worse. For example, its acidity will unsettle your stomach more than it already is. In addition, it’s known to drop sugar levels which are not ideal when hungover.

For that reason, we wouldn’t rate apple cider vinegar as your go-to hangover aid.

You can check out our article about other natural hangover cures which may give you better results.

Is Milk Thistle Good For Hangovers?

Niacin for Hangovers – Does it help?