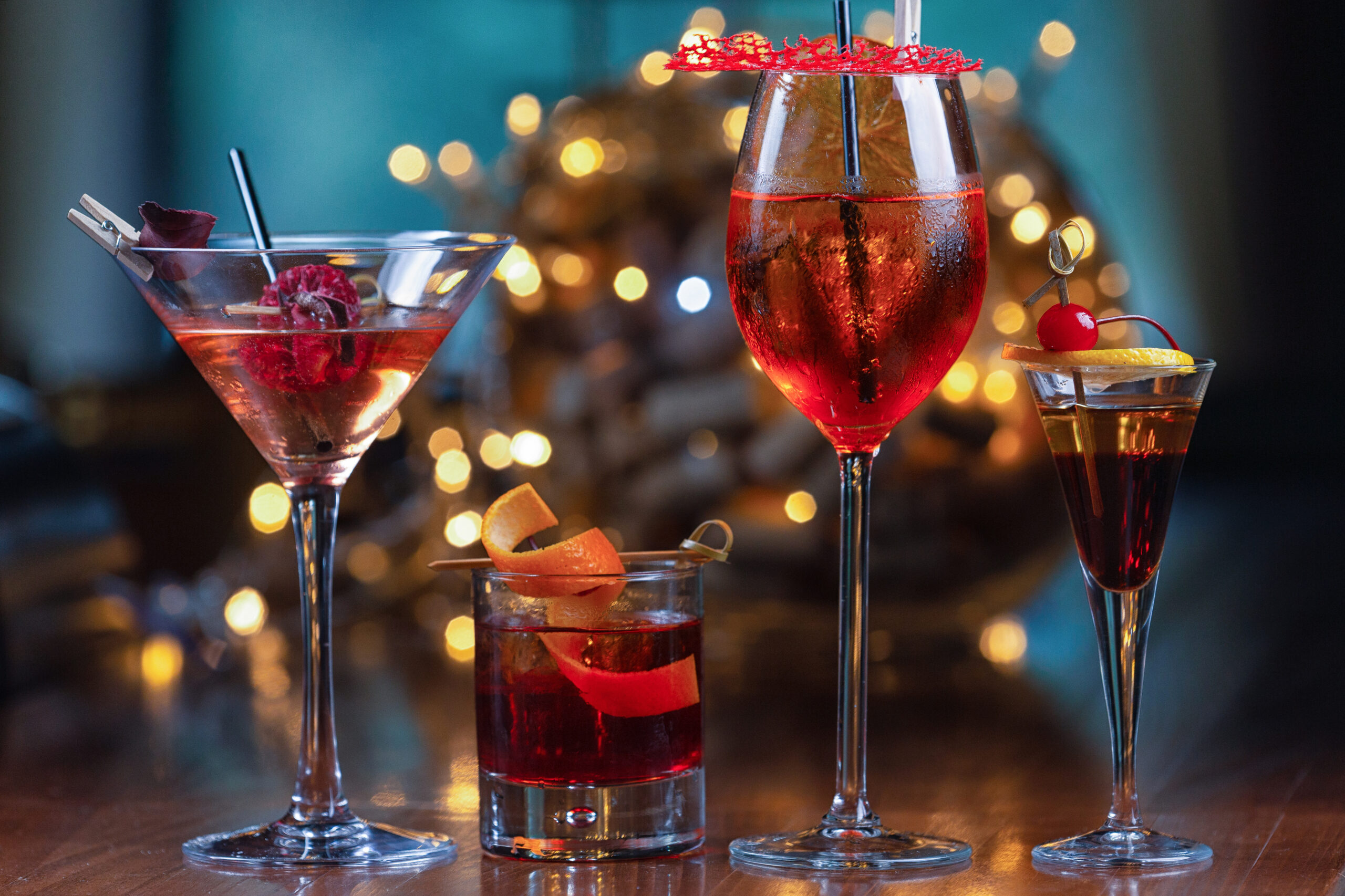 The holiday season is upon us, and you know what that means. It’s time for mandatory fun! Just kidding, but as you’re reading this your social calendar is probably filling up. Holiday parties are full of delicious foods, sweets, and of course, holiday cocktails.

When events line up back to back, the last thing you want to deal with is a horrific hangover. Your ugly Christmas sweater won’t be able to high last night’s eggnog stomach ache for long. So, what’s a holiday party animal to do?

Well, we have a solution. You’re going to have to choose your drinks wisely this season if you want to hit all the parties without all of the hangovers. We’ve put together a list of cocktails to stick to when you’re having a holly jolly time that should keep you in good shape.

Keep in mind, you can’t completely avoid a hangover, but pacing yourself, staying hydrated and making wise liquor choices can help ease symptoms. Let’s get this party started!

What to Drink at the Holiday Party

The martini is a classic option when you want to avoid a hangover at the holiday party. Not only that, but they’re a great choice for pretending you’re on an episode of Mad Men. This simple cocktail is typically made with gin, vermouth, an olive or lemon wedge.

If you’re at a party where you don’t know a lot of people, ordering drinks can be stressful. Ordering a martini will make you look like you know what you’re doing. A martini is also ideal when trying to avoid hangover symptoms.

The main ingredient is gin (or vodka) which is a clear liquor. One of the main culprits of a hangover are congeners. They’re the byproduct of the fermentation process, and can cause that pesky headache the next day. Research shows that they’re commonly found in darker liquors, so sticking to gin can lessen your chance of a killer hangover the next morning.

Keep in mind that this doesn’t mean a martini won’t give you a hangover. If you drink enough of them, you obviously will still have one. It’s just a better option than say beer or wine if you want to avoid worse hangover symptoms.

If you don’t like vermouth, you may want to stay away from the martinis. Another classic cocktail is the vodka soda. This simple and delicious drink combines vodka and soda for a refreshing beverage that, if drank in moderation, should keep hangover symptoms away.

Vodka is also a clear liquor, so it will be low in congeners. In fact, research suggests that out of all the liquors, vodka is least likely to give you a hangover. So grab a festive straw and keep sipping!

A Tom Collins is another delicious drink option if you’ve got work in the morning. This cocktail combines gin, lemon juice and soda water. Sometimes there’s a bit of sugar added, as well and a cherry.

This cocktail is versatile and can be made with any liquor you’d like. You can also ask for less liquor and more Tom Collins mix, so you aren’t having as much alcohol. If you’re trying to avoid a hangover, skip the sugar. While sugar on its own won’t cause a hangover, it can make your hangover symptoms worse.

We’re sticking with the clear liquors to keep you away from those congeners. If you’re not a big vodka fan, try a gin and tonic. Tonic has a higher amount of sodium than soda water, but there’s no sugar.

You can also ask for more tonic in your cocktail, so you’re not drinking as much gin. You can trick yourself into drinking less in a way when you do this, so you can party all night and still make it to the next function tomorrow!

What to Avoid at the Holiday Party

Now that we know what we SHOULD drink when we’re getting festive, let’s talk about what to avoid. Those holiday drinks full of heavy cream and sugar may look tempting, but mixing those ingredients with alcohol is a recipe for disaster in the morning.

Eggnog is obviously a holiday staple, and many people simply can’t pass it up. This holiday concoction is made from eggs, heavy cream and sugar. Typically, it’s spiked with rum for the boozy effect. It can be difficult to drink enough eggnog to give you a hangover, but it’s possible. Not only are you drinking alcohol, but you’re putting a lot of additional calories into your body.

Rum is a dark liquor, and will be high in congeners. So your hangover symptoms risk will go up when you ditch the martini for the eggnog.

Red wine is notorious for its ability to give you the worst hangover of your life. Research has been done to prove that the red wine hangover headache is a real thing. This is because red wine is full of those sneaky congeners waiting to wreak havoc on your body.

If you want to take part in the holiday tradition of mulled wine, do so at your own risk. One glass may be enough to have you in sunglasses on Christmas morning.

Ah, the hot toddy is a delicious winter drink that will warm you right up. A hot toddy is made with honey, lemon, cinnamon and dark liquor such as whiskey. The health benefits of lemon, honey and cinnamon are no match for the congeners in dark liquor.

If your hot toddy is made with bourbon, be ready for a hangover. Bourbon has 37 times the amount of congeners than vodka. It’s also reported that it gives some of the worst hangovers besides red wine.

Winter weather seems to bring on cocktails that involve cream. A white Russian is another drink to avoid if you want to save yourself the hangover blues. We mentioned that you should stick to clear liquor, but not in the cash of the white Russian. This drink contains vodka, coffee liquor and heavy cream. It’s a recipe for a stomach ache the next day.

You might not like this, but the only way to truly avoid a hangover this holiday season is to not drink. If you have big plans the next morning, sticking to mocktails could be a good option. For those who want to get a little boozy, setting a limit and drinking in moderation will lower your chances of ending up with a holiday hangover.

If you want to have cocktails on our ‘avoid’ list, go for it! Make sure you take the proper precautions, and keep in mind that you may still experience hangover symptoms after just one.

To sum it up, we don’t want you to miss your holiday gatherings! The worst possible outcome is that you have back to back functions and overdo it at the first one. You’ll be sleeping off too much eggnog instead of boogying at another shindig.

Make sure you stay hydrated and eat enough food so those cocktails doesn’t absorb too quickly. Remember, you can have fun without slamming back ten drinks!

‘Tis the season for partying, but please do so responsibly! Have a cocktail for us. Cheers!