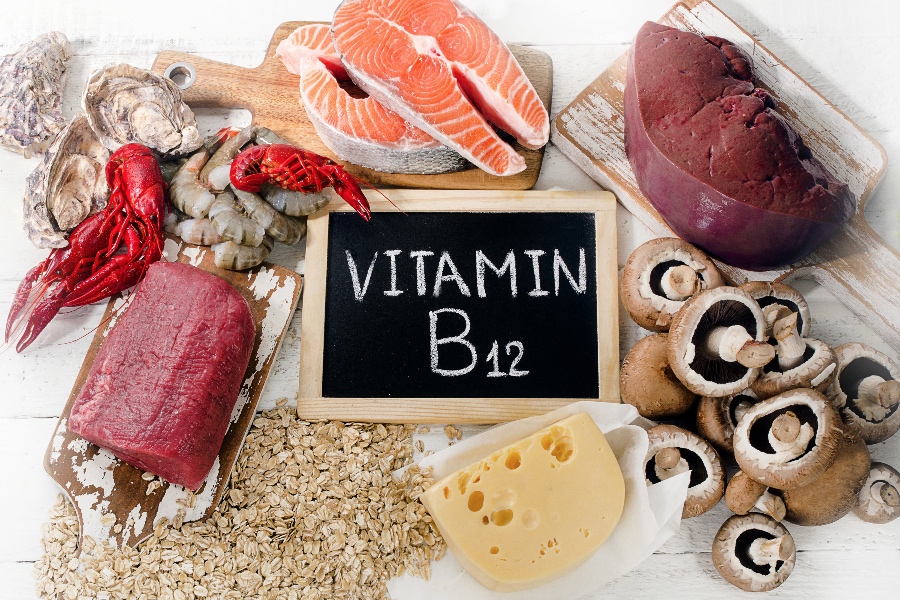 People have been looking for a hangover cure since the discovery of alcohol.

Nowadays, you’ll find hangover supplements in all shapes and forms that promise to take the edge off the night before. And most of them include vitamin B12.

But does this vitamin actually do anything for your hangovers?

To understand whether B12 is good for hangovers, we first need to go over what this vitamin does and how alcohol affects it.

What is vitamin B12?

Vitamin B12 is one of the eight B vitamins that exist.

It’s found in high concentrations in animal products including meat, fish, eggs, and milk. People who don’t eat animal products like those who stick to a vegan diet can become deficient in B12 levels.

That being said, there are some plant sources of B12, but you’ll need a lot to maintain stores.

Vitamin B12 is stored in your liver cells and a healthy person with normal levels will have between 3 to 5 year stores of it. Therefore, it usually takes a long time to become deficient in B12.

What does vitamin B12 do?

Vitamin B12 is a cofactor which means it’s an essential component for certain enzymes to work.

To put it simply, cofactors function as cogwheels in the machine and without them, it stops working.

Specifically, B12 is important in the synthesis of DNA that is crucial for the production of red blood cells and nerve cells.

As a result, deficiency leads to a certain type of anemia called “megaloblastic” and also “neuropathy” which means dysfunction in nerve cells.

Now that we’ve got the science out the way, let’s take a look at whether drinking alcohol affects vitamin b12 levels.

Does drinking cause b12 deficiency?

To look at whether drinking causes b12 deficiency, we need to separate out acute from chronic alcohol consumption.

Acute alcohol consumption refers to drinking alcohol in a short period of time – for example on a night out at the weekend.

Acute alcohol consumption and b12 deficiency

So, you’ve been on a night out and had one too many at happy hour. Will this deplete your b12 levels?

One study on 77 patients presenting to the emergency department with alcohol intoxication tested the blood levels of vitamins in their patients and found that none of them b12 deficiency.(1)

Interestingly, However, 15% did have thiamine deficient which is also known as vitamin B1. We’ll come back to this later in our article.

Chronic alcohol consumption and b12 deficiency

In this group of people, measuring b12 levels becomes a bit more complicated because over a long period of time b12 levels are usually affected by how much you’re consuming in your diet.

Another group of researchers looked at the effects of chronic alcohol consumption in rats while keeping other parts of the diet the same.(2)

This way, you get a fairer representation of whether alcohol has any effect on vitamin b12 levels.

They found that feeding rats regular alcohol over a long period of time also had no effect on b12 levels.

Overall, from the research studies published online, it doesn’t seem that alcohol has an effect on b12 levels.

Is b12 good for hangovers?

So if there’s no drop in b12 levels from drinking, does b12 have any benefit for hangovers?

Most hangover supplements on the market include it in their ingredients formula but we can’t see much explanation as to why it’s included.

Putting the evidence together, it’s probably unlikely that b12 has any benefit for hangovers.

Especially as you have many years worth of b12 stored in your liver (if you have a balanced diet).

Therefore replacing it after a night out in a hangover supplement won’t do much.

Which B-Vitamins are good for hangovers?

Although b12 may not have many benefits for hangovers, there are studies that have shown that alcohol can drop levels of vitamin B1, B2 and B6.

A group in Japan tested B vitamin levels in rats after giving them alcohol and found that these vitamin levels dropped whereas the others stayed the same.(3)

Why this happens isn’t exactly clear however there are some theories.

Firstly, alcohol is a diuretic which means it makes you pee more fluid than you are consuming. It makes your kidney flush our more water and as a result, you also get loss of electrolytes and water-soluble vitamins, which the B vitamins are an example of.

Vitamins B1, B2 and B6 are not stored unlike B12 so levels can drop after drinking.

In addition to vitamin loss via the kidneys, vitamins B1, B2 and B6 are essential for metabolizing food to produce energy. Alcohol is technically a source of energy and these vitamins are used-up producing the enzymes required to break it down.

Moreover, these vitamins are essential for regenerating antioxidants that are used up to neutralize the toxic by-products of alcohol breakdown.

You can read more about this in our article about antioxidant vitamins.

Thankfully, most of the best hangover products on the market contain these B vitamins which can help replenish depleted stores.

That brings us to the end of our look into whether vitamin B12 is beneficial for preventing or treating hangovers.

The current research doesn’t say it is.

B12 is essential for red blood cell production and nerve cell generation. It’s not so much involves in the metabolic processes that break down alcohol.

Therefore, overall we can’t see much benefit from choosing a supplement with B12 in it for the purpose of hangover prevention.

That being said, other B vitamins such as B1, B2, and B6 could make a difference as levels have been shown to decrease after drinking alcohol.

Wine allergy – What are the symptoms?