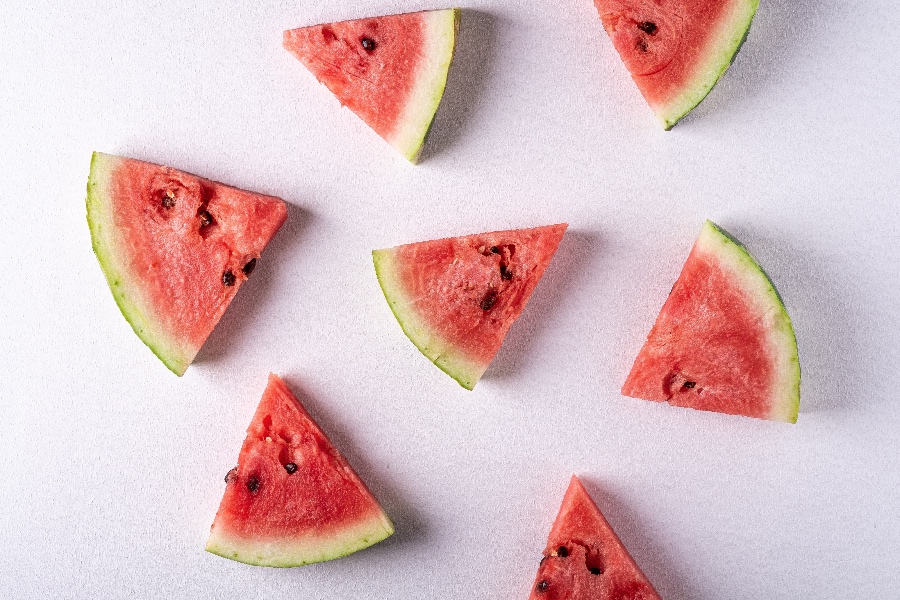 Watermelon for a hangover: is it any good for you? If you’ve landed on this page, chances are, you’ve heard that it’s a thing and are wondering whether it’s true or not.

In this article, we’re going to take a detailed look at watermelon for a hangover. Firstly we’ll focus on the benefits off watermelon to see whether it contains any anti-hangover nutrients.

Then we’ll move onto the big question about whether watermelon is good for a hangover or not.

Whether you’re thinking of trying watermelon or watermelon juice for your hangover, we’re going to cover everything you’d want to know.

Watermelon is made up of more than 90% water and as far as fruits go, it’s one of the lowest in calories. It contains only around  50 calories per cup (150 grams).

A cup of watermelon contains the following nutrients as well:

Watermelon is also high in carotenoids, including beta-carotene and lycopene. Plus, it has citrulline, an important amino acid. Lycopene is an antioxidant which has been linked to many health benefits.(1)

That said, if you’re buying pre-made watermelon from your local food store, it’s likely to be watered down. In addition, it could also contain added sugars and preservatives which you may want to avoid.

Is watermelon good for a hangover?

To answer whether watermelon or watermelon juice is good for a hangover, we first need to go over how alcohol affects your body.

Hangovers are a sign from your body that you’ve been drinking more than your liver can handle. On average, your liver is able to process around one standard drink (i.e one glass of wine) per hour. Depending on your age, sex and muscle mass, the rate at which you metabolize alcohol greatly varies between different people.

When your blood alcohol levels exceed that in which your liver is able to break down, you start to feel drunk as well as get a build-up of alcohol’s toxic by-products. This causes inflammation and damage which is one of the causes of a hangover.

Finally, alcohol severely disrupts your sleep quality by preventing you from reaching the deeper stages of sleep. Also known as the REM stage.

As you can see, the science of a hangover is a complex and multifactorial one.

So, can watermelon counteract any of these negative effects of alcohol?

Seeing as watermelon is mostly made of water, it’s a great source of hydration. But, you could rehydrate by drinking water instead, which will have the same benefit.

Other than this, watermelon contains a small number of antioxidant nutrients like vitamin C and Lycopene. Whether these nutrients help hangovers hasn’t been tested in research studies, therefore it’s unknown whether they’ll be of great benefit.

Fructose is the main sugar in fruits like watermelon and it’s been shown in studies to increase alcohol metabolism.(2)

That said, these studies were from 1991 and need more research in larger studies.

The Botton Line:  It’s tricky to say whether watermelon or watermelon juice is good for a hangover. But stacking up all the causes of a hangover against the nutritional content of watermelon, we can say it’s probably unlikely to make a big difference. At the very least, it’s a refreshing and hydrating fruit that won’t do any hard to drink when hungover.

When to eat watermelon for a hangover

Despite watermelon being an unlikely contender for an elusive hangover cure, you may still want to try it anyway. So, when’s the best time to eat or drink it?

When it comes to hangovers, prevention is key. Rehydration and refueling with nutrients is important before your hangover has fully taken hold. Trying to pick up the pieces when your body has already been battered by alcohol is a backward approach.

Therefore, if watermelon is going to have any positive effect on your hangovers, it’s best to eat it after your last drink. At the very least, you’ll get some hydration benefits this way.

What about Watermelon juice?

In most cases, watermelon juice is just blended watermelon. So it shouldn’t make a difference which one you chose as your hangover elixir.

That said, you can obviously purchase watermelon juice ready-made from a carton or bottle. These will almost always contain added sugar which is unlikely to have any particular benefit for a hangover.

The Bottom Line: Watermelon or watermelon juice are equal and there is no particular benefit of one over another for hangovers.

Hangovers are caused by drinking over your limits. The best way to prevent a hangover is to limit your intake, as well as keeping well hydrated throughout your night.

Simple steps such as having a meal before going out and sticking to lighter colored drinks can also go a long way in preventing the worst hangovers.

That brings us to the end of our look at whether watermelon or watermelon juice is good for a hangover.

The short answer to this question is that it depends. It’s a refreshing drink that’ll make most of us feel instantly better when hungover.

Whether it has any hangover preventing properties is up for debate. Perhaps, the small number of vitamins and minerals it contains could support your liver. However, there are no research studies to prove its benefits.

If you’re interested in natural hangover remedies, check out our article on the best juices for a hangover.