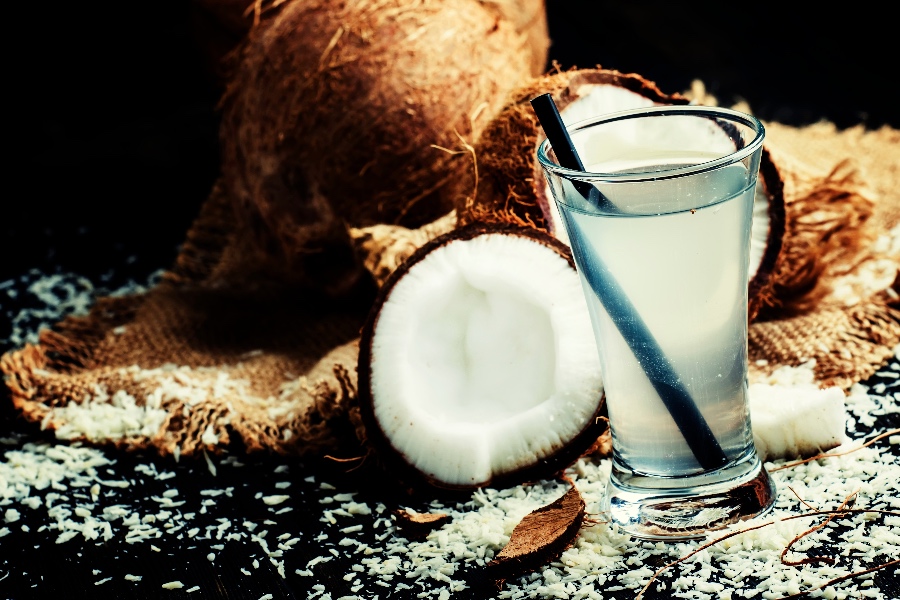 Some people swear that coconut water is great for curing hangovers.

But then again, a lot of people have a lot of opinions without backing any of them up. Celebrities and influencers have been known for promoting the benefits of coconut water.

Because it is so trendy and presumably healthy, many coconut water brands have developed huge marketing campaigns all based on the assumption that it’s really good for you!

It’s important to research anything that claims health benefits before you invest your money into it.

What we will aim to do in this article is clear things up for you based on science.

We want to take a close examination at whether coconut water works as a hangover cure like people say or if it’s another bogus health myth.

To understand if coconut water is a good prevention or cure for a hangover, first, we need to really understand what a hangover is.

It can be overwhelming to read up on all the science behind hangovers so we’ve tried to break it down for you as simply as possible.

1) Dehydration
Alcohol is a diuretic. What does this mean?

It means that your kidneys flush out more water than they are taking in. When you drink alcohol, you may find you need to make frequent trips to the toilet.

This can lead to dehydration which has negative effects on the body.

Toxic by-products
When alcohol is metabolized by the liver, it produces toxins as a by-product. One of these toxins is called acetaldehyde which is highly volatile and reacts with cells to cause damage and inflammation.

In normal circumstances, antioxidants neutralize acetaldehyde before it causes too much damage. Your liver produces antioxidants and you also get them from the food you eat. However, during periods of overindulgence, this system is pushed over the edge.

Congeners
You may have heard of these because they are found in dark-colored alcohols. Methanol, tannins, and esters are all examples of congeners.

It’s well known that congeners make hangovers worse and it’s been shown several times to do so in research studies.

Poor sleep
Alcohol is also known to affect your sleep quality by preventing you from reaching the deeper stages of sleep, also known as REM sleep. Therefore, you’re guaranteed to have a poor nights sleep even if you’ve slept the same amount of hours.

Coconut water is made up of 94% water on average. The following is a list of nutrients found in your average natural coconut. Obviously, these values will vary depending on the size and quality of the coconut.

Do these Coconut ingredients cure a hangover?

Water
This may sound obvious but of course, the coconut water is largely water-based. When you’re dehydrated the best way to rehydrate is water.

What people don’t know is that Vitamin C is also an antioxidant. Antioxidants help support your natural defenses against oxidative damage. It helps neutralize those nasty free-radicals.

Magnesium and Manganese
Alcohol depletes magnesium stores so it is good to replenish lost magnesium. Alcohol being a diuretic means these minerals are lost easily when you start drinking.

Magnesium and manganese are essential minerals and so, therefore, coconut could replace some of what’s lost.

When is the best time to drink coconut water for hangovers?

Even though most people try to cure their hangovers the day they start feeling one, its actually a much better idea to start a bit earlier.

Try drinking some coconut water before you go to bed after you’ve had your last drink.

Whilst you’re asleep and your body starts to dehydrate, it’s better to try and replace what will be lost before any damage is done.

Does coconut water work as a hangover cure?

There is no scientific evidence to prove coconut water is a cure for hangovers.

This is mainly because to have a cure would mean waking up after a night of drinking with no hangovers whatsoever!

The only sure way of not getting a hangover is by not drinking in the first place.

But if that’s not what you want to hear (which it probably isn’t) then it’s fine to try coconut water and see if it helps.

It’s a tasty drink with some beneficial ingredients but unfortunately, it’s no magic cure.

Are there side effects?

Because coconut water contains such a high percentage of water, a tiny dose of sugar and some minerals, its unlikely coconut water would be bad for hangovers.

Generally speaking, coconut water is a healthy drink made of natural ingredients.

The only instants where it may not be good for you is if the sugar content is very high. But as we said earlier, make sure you check the ingredients when buying!

So that brings us to the end our analysis of coconut water as a hangover cure.

Overall coconut water is a good way to hydrate as it is packed with water and contains vitamins and minerals which we know to be good for you.

However, the quantality of the vitamins and minerals in the water isn’t particularly.

In conclusion, drink coconut water if you want a healthy drink but don’t rely on it working for as a powerful hangover cure!

You can read more about natural hangover cures in our comprehensive guide.

Best Drink for No Hangover