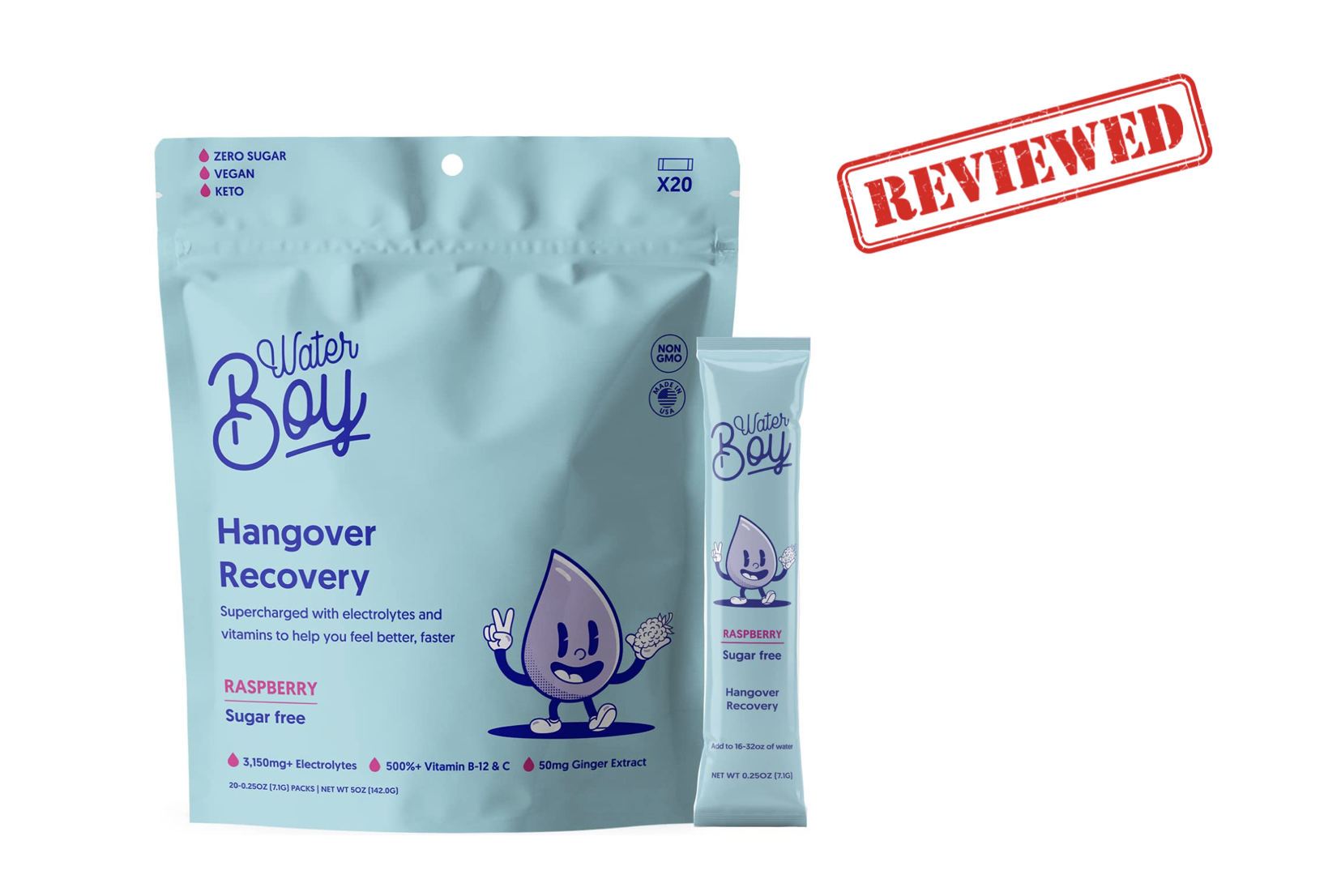 Waterboy for Hangovers Review – Does it Work?

Rehydration products have become all the rage in the hangover community. While they’re not typically marketed towards the headache-riddled partier, they definitely come in handy the next morning. Waterboy has decided to cut right to the chase and point the finger at you and your hangover.

Waterboy is a rehydration packet brand that’s all about wearing your hangover on your sleeve. Not only that, but they’ve taken what they’ve seen other brands do and kicked it up a notch. Dehydration is one of the main causes of a hangover, so it’s no wonder they took off.

With so many supposed hangover cures on the market, do they really work? We’re going to answer that question and then some as we break down Waterboy and give you an honest review.

To start, Waterboy is a rehydration packet that you can pour into water after a night out. It’s full of all the good stuff you need to replenish your body.

Alcohol is a diuretic, which is why you spend half the night waiting in line for the bathroom. When you start drinking, your brain stops telling your kidneys to absorb water, so it goes right through you. Not only are you going to be peeing all night, you’re also going to wake up dehydrated with extreme thirst the next day. That’s where Waterboy comes in. Waterboy boasts a list of all-natural ingredients, along with being gluten, dairy and sugar free. It’s also keto friendly! Their comparison chart on their website boasts having over 2,000mg more electrolytes than Liquid IV, which is one of the most popular rehydration solutions on the market. There are also quite a few ingredients in Waterboy that you won’t find in other rehydration packets.

Along with hugging the toilet and fighting off a headache, hangovers can cause ‘hangxiety.’ Waterboy contains L-theanine, which is an amino acid that can help ease stress and calm anxiety. It’s also known to help with insomnia.

Ginger is an all-natural herbal remedy that’s known for easing stomach issues. Waterboy has included it in the product to fight over the upset stomach all those shots of tequila gave you last night.

People commonly take B vitamins for hangovers, and Waterboy includes vitamin B12. B vitamins are needed for metabolism, and can give your body a boost after a night of drinking. Your liver is going to need all the lep it can get to metabolize that alcohol.

Vitamin C is another common hangover remedy that’s included in the Waterboy ingredient. There’s no scientific evidence to back up this claim, but Vitamin C is an important antioxidant in the body.

Another ingredient listed is magnesium. While there isn’t much research to backup this claim, many hangover remedy websites suggest that magnesium will improve hangover symptoms.

Overall, Waterboy is ticking all of the hangover rehydration ingredient boxes. Other rehydration packets fail to touch on ‘hangxiety’ and other issues such as nausea. Waterboy has added ingredients to lessen those symptoms along with replenishing your electrolytes.

The extra ingredients may be due to the fact that Waterboy is marketed towards people wanting to relieve their hangovers. It could use more vitamins, however, such as more B vitamins to round out the product.

If you put Liquid IV and Waterboy next to each other, they’re similar products. You put them both in 16oz of water, and they both contain essential vitamins and minerals. Liquid IV contains more vitamins, but Waterboy covers other areas. For instance, Waterboy has L-theanine for anxiety and ginger for nausea.

Liquid IV also contains sugar, and a far smaller electrolyte count. So if you’re trying to avoid sugar, Waterboy is the better choice. If you’re looking for a way to resolve hangover symptoms, Waterboy may be the better solution.

How to Use Waterboy

Unlike other rehydration products, Waterboy is very blunt about being used for hangovers. When it comes to nipping a hangover in the bud, it’s all about timing. The Waterboy website recommends taking one the night before, as well as in the morning.

All you need to do is open a packet up and pour it into 16oz of water, which you should already be drinking if you’re hungover. Try to curb dehydration before it starts.

Are There any Side Effects?

Since you’re drinking all-natural vitamins and minerals, no there shouldn’t be any side effects to using Waterboy. They also mention on their website that there are no known allergens in the product, as well.

Waterboy has been getting a lot of positive feedback on their website. Here are some of the most recent reviews:

“Gets the job done: Works well after a night of drinking” – 5 stars

“Used for a night out partying. Drank one before I started and one before bed. No hangover. Love no sugar!” – 5 stars

The no sugar aspect is winning the people over with Waterboy.

After taking a good look at Waterboy, we can safely say it’s a great option for rehydration products. It’s especially great if you’re on a no sugar diet since so many products like Liquid IV have sugar in them.

Even with the invention of products like this, it’s always important to drink responsibly. A little packet of vitamins isn’t going to save you from the inevitable hangover that’s going to follow a night out.

Staying hydrated before, during and after a night of drinking will keep you from becoming too dehydrated and may lessen your hangover symptoms.

Make sure you take care of yourself, hydrate, and stay safe!