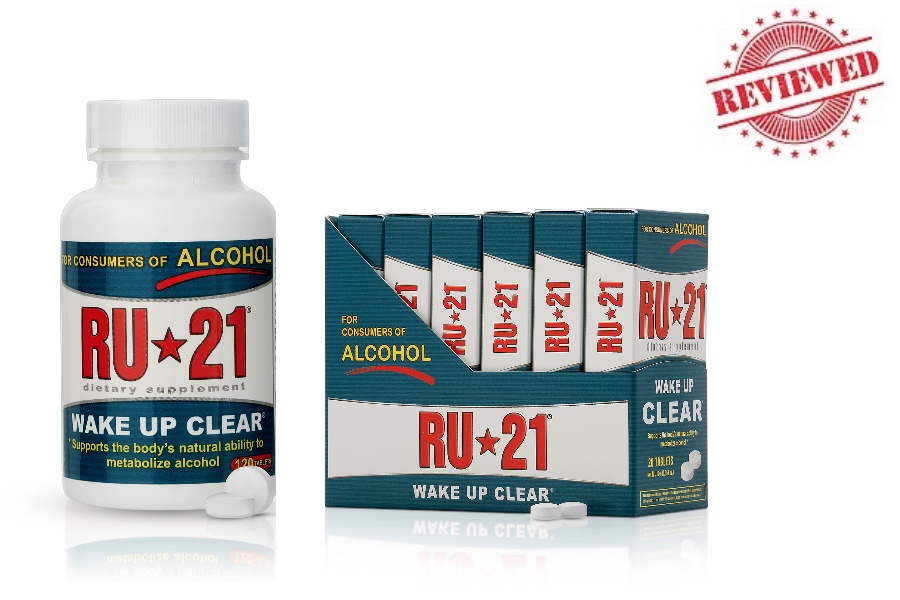 RU-21 is one of the original hangover prevention supplements to come on the market.

Its been around since 2002 so it’s one of old boys in the business!

The hangover pill market is booming and with more and more products emerging every year, we thought it’s a good time to put RU21 to the test.

But how does it fare against the newer products on the market? Can RU21’s original formula compete with the best products?

Well, we’re going to find out today by taking a closer look at this product, paying close attention to the company reputation, customer reviews and most importantly, their ingredient list.

So with the introductions out the way, lets get straight into our RU21 hangover pill review.

A little bit of digging bought up some interesting information about RU-21 and its origins: RU-21 is the commercial name of a tablet called Antipokhmelin, a Russian tablet that allegedly helps overcome the negative effects of alcohol consumption and hangovers.

The main ingredient in Antipokhmelin is succinic acid and is said to have anti-hangover effects by supporting your livers detoxifying function.

On their website, they claim to have sold over 140 million tablets worldwide which means they’ve sold over 1 million bottles (120 pills each) and are doing very well for themselves.

We’re not sure if this is really true, but we’ll take their word for it!

Either way, we’ve learnt not to pay too much attention to marketing material and rather look at the ingredient list to see whether the product actually works. 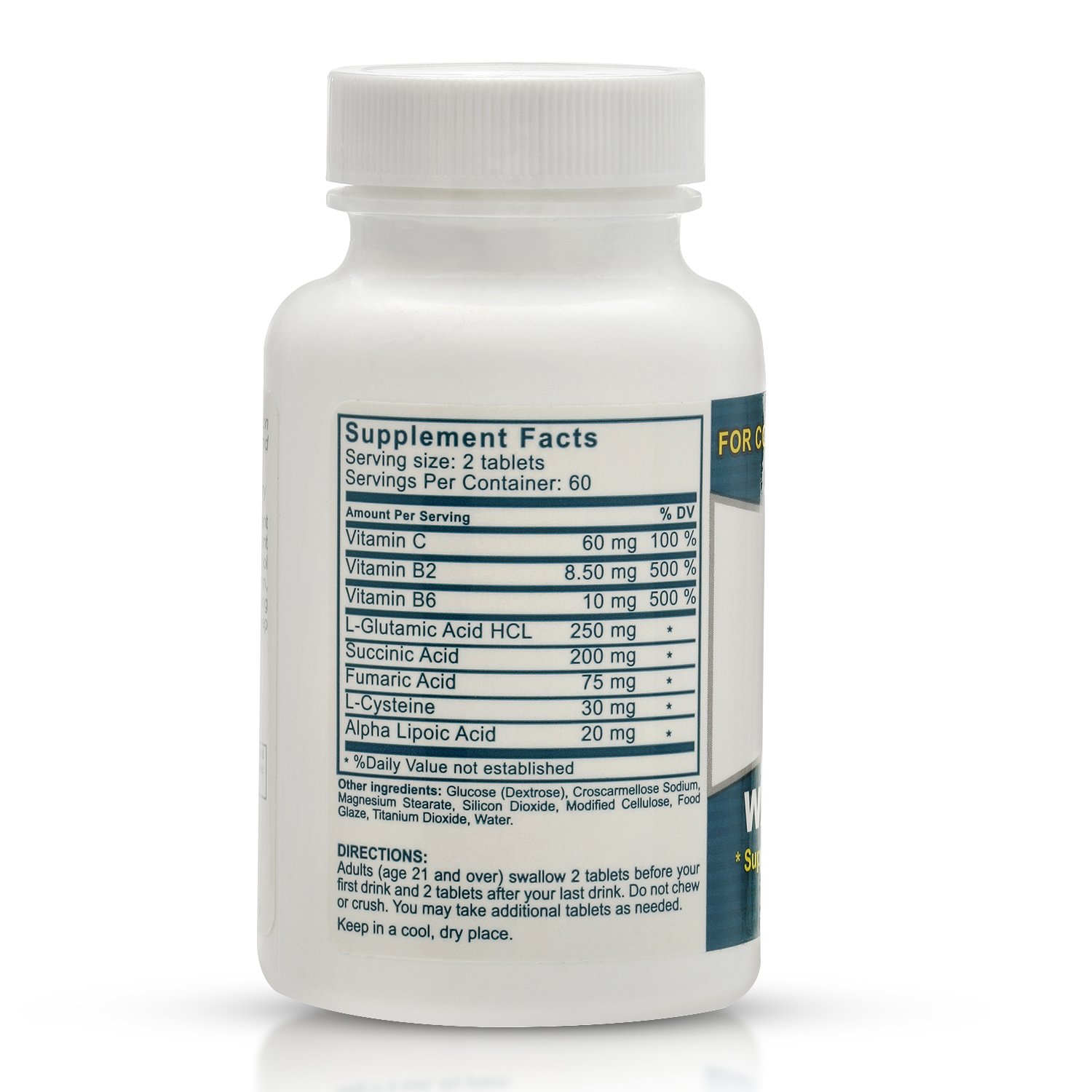 Let’s break down the actual ingredients of RU-21 pills:

Alcohol is broken down by your liver to produce energy. This is a multi-step process known as the krebs. Succinic and fumaric acid are important in this cycle and keep the system working.

When you drink, this cycle is over-worked and as a result slows down causing a backlog of alcohol to be processed.

RU21’s formula is based around replenishing these acids to keep the krebs cycle working and break down more alcohol.

Vitamin C is important for immune health and connective tissue repair but it’s also a powerful antioxidant. Clearing up free-radicals before they cause damage is essential to reducing hangovers.

Vitamin B2 is essential for the metabolism of carbohydrates (to produce energy) and amino acids. It also helps keep mucous membranes (such as those lining the mouth) healthy.
Riboflavin is further needed to activate vitamin B6 (pyridoxine).

Vitamin B6 is needed for the synthesis of neurotransmitters such as serotonin and dopamine. These neurotransmitters are required for normal nerve cell communication. Vitamin B6 increases oxygenation of tissues by helping the body produce hemoglobin, which is responsible for carrying oxygen to tissues within red blood cells

Cysteine is the precursor to glutathione which is known as the most powerful antioxidant in the body. Your gut cant absorb glutathione directly so boosting cysteine levels could boost your livers production of glutathione.

Alpha Lipoic Acid is another antioxidant which neutralises free radicals before they cause too much damage.

Dihydromyricetin (DHM)
DHM is making waves in the hangover prevention world as several studies have shown it can increase alcohol break down and reduce hangover symptoms. We thing this is a key ingredient in any hangover pill and most of the top products on the market today include this.

Milk Thistle
This is commonly used for hangover prevention all over the world. Milk thistles active ingredient silymarin is a powerful antioxidant and has been shown in studies to reduce liver inflammation.

Vitamin B1 and B3

RU21 include B2 and B6 but we are very surprised to see the omission of B1 and B3 which are crucial vitamins that support the livers normal metabolic functions.

We always prefer to see ginger in our hangover prevention solution because its great for reducing symptoms of nausea. It’s a well researched ingredient when it comes to its anti-sickness properties so can be helpful for unsettled stomachs after drinking.

This is an amino acid found almost exclusively in green tea. It’s perceived health benefits are related to calming anxious nerves and many people drink it for this reason around the world.

There are quite a few more ingredients we could list but we thought we’d spare you the long list.

The creators recommend that you take two RU-21 hangover pills before your first alcoholic drink, and two pills after your last drink.

They note that “because individual metabolisms vary, modifications of these directions are acceptable.”

This is a standard dosing regimen when it comes to hangover prevention supplements. This is because the ingredients need to work as soon as alcohol and its by-products are in your system.

Theres no use trying to “cure” your hangover once its already taken hold. If you forget to take your tablets until the morning, then I’m afraid RU21 isn’t going to help much.

Hangovers are a sign from your body that you’ve been drinking too much. So the only real way to prevent a hangover is to reduce the number of drinks you’re having.

As always, its important to drink plenty of fluid on your night out and have a meal before you go out.

You should also consider sticking to lighter coloured drinks which contain less “congeners”. These are found in higher concentrations in darker coloured drinks like whisky and red wine and are associated with worse hangovers.

That brings us to the end of our RU21 hangover pill review. We have to give it some respect as it’s one of the original products on the market designed to prevent hangovers. It’s a good product with a solid reputation.

For our pick of the best hangover products on the market, follow the link below.

Over Ez Hangover Pill Review – Does this hangover pill work?