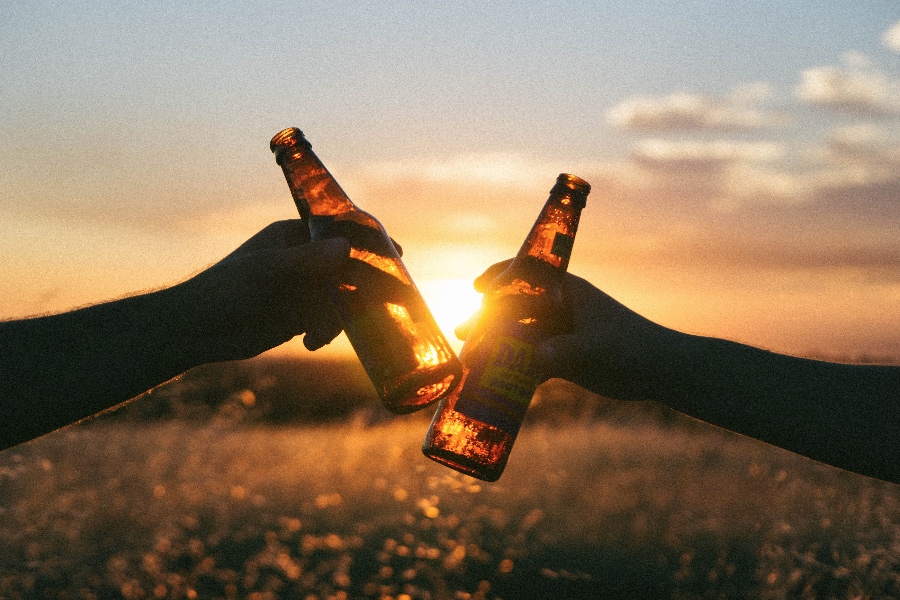 Looking for fun alcohol facts? well, you’re in the right place. To kick things off, did you know that schoolteachers in Russia were once paid in vodka?

During an economic crisis in Siberia in the late 1990s, the government had no money to pay the teachers’ salaries. The teachers responded with indignation at the offer of toilet paper, so the government offered them 15 bottles of vodka—each.(1)

What’s the takeaway? If you’re a vodka lover, you may want to consider becoming a teacher in Siberia.

Here are 16 fun facts you can use the next time you want to “wow” somebody at the bar. Read on to complete your alcohol education!

Here’s a great trick you can try at your next house party. Grab a UV light, pour a few gin and tonics for your friends, and turn off all the light except the UV lamp.

Surprise! Those drinks will literally glow in the dark.

Why? Tonic water contains quinine, which absorbs ultraviolet light and re-emits it as visible light. This makes it “glow” while the other components remain dark.

Bonus tip: This trick will work with any drink containing tonic water, so feel free to use vodka or another favorite liquor instead.

Your favorite treat as a kid would have given you quite the buzz if you consumed it in 1885.

Far from the chocolatey concoction we know today, the original “milkshake” more closely resembled eggnog. It was a rich, frothy mixture of whiskey, eggs, and milk or cream. If a customer enjoyed his drink, he would shake hands with the bartender (hence “milk” and “shake”).(2)

It wasn’t until the early 1900s that milkshakes based on ice cream and malted milk powder became the norm.

Steps aside, Bacardi 151. You don’t need to reach for the hard stuff to get a good buzz.

All you need to do is visit Scotland and order a bottle of super-potent Snake Venom beer. Brewmeister’s first version of the beer was 65% alcohol, and some people complained it wasn’t strong enough.(3)

They released a new version with 67.5% alcohol, which seemed to satisfy the die-hards who really wanted to taste the alcohol. It’s so strong it actually comes with a yellow health warning on the label!

When you eat food, it takes your body a while to digest it and absorb its nutrients.

Not so with alcohol, which quickly affects every cell in your body. Within 90 seconds of your first sip, the lining of your mouth and stomach absorb some of the alcohol directly into your bloodstream.(4)

It even crosses the blood-brain barrier, which was designed to keep harmful substances out of your brain. It’s no wonder that too much alcohol can wreak so much havoc on every part of your body and mind!

5. Fructose Speeds Up Alcohol Metabolism by 80%

There are a lot of myths about what to eat or drink to help your body eliminate alcohol faster. The truth is that your body can only eliminate a certain amount of alcohol every hour, regardless of anything you eat or drink.

Interestingly, though, researchers found that large amounts of fructose can significantly speed up the rate at which your body processes alcohol. One study showed an impressive increase of 80%!(5)

The catch is it takes a lot of fructose to produce this reaction—about 100 grams. Unless you feel like eating 7 or 8 apples when you’re hungover, you’re better off seeking a different hangover cure.

6. Dark Drinks Give You Worse Hangovers

Have you heard of a congener? It sounds like something from a sci-fi/fantasy novel, but it’s actually the name given to naturally occurring by-products that form during the fermentation and aging process of alcohol. They’ve been shown to significantly worsen hangover symptoms.(6)

Examples of congeners include histamine, tannins, and aldehydes. These can trigger a migraine in some people as well as allergic reactions.

You’ll find congeners in red wine and dark liquors like whiskey, bourbon, and scotch. Your best bet at avoiding a hangover is drinking clear or lighter-colored liquor.

7. The US Has the Highest Drinking Age in the World

Teens in many countries around the world can legally drink alcohol, but Americans have to wait until they’re the ripe old age of 21.

A few other countries also have a minimum drinking age of 21, including Mongolia and Sri Lanka.

8. It’s Illegal to Get a Fish Drunk in Ohio

Just in case you live in Ohio and were thinking of pouring some beer into your fish tank—don’t. It’s illegal.

Every state has its share of weird laws, but Ohio has some we truly can’t believe are real. In addition to giving alcohol to fish, it’s also illegal to fish for whales on Sundays or to sell animals for sex.(7)

So if you want to see what happens when you get fish drunk, you’ll have to hop the border into Indiana. We hear it’s acceptable there.

9. Kids in the UK Can Legally Drink at 5 Years Old

No, you won’t see any 5-year olds sitting at the bar drinking a pint in the UK. The legal age for drinking in public is 18 years old.

However, when it comes to the home, British laws are quite lax. Parents can legally give their children alcohol at home if they’re between the ages of 5 and 17.

Of course, there are plenty of health risks associated with young people consuming alcohol. We hope that any parents who allow their kids to drink keep a close eye on them.

10. Alcohol Is as Old as Human Civilization

Enjoying an alcoholic libation isn’t a modern trend. Historians reckon that the practice of making and drinking alcohol goes back almost 10,000 years.

Researchers have found alcoholic residue on pottery uncovered in the Yellow River Valley in China. The fermented drink was a mix of rice, honey, and hawthorn fruit (or possibly grapes).

The amazing part? They’ve dated the pottery to somewhere around 7000BC.(7)

11. You Can’t Drink Alcohol in British Parliament (unless you’re the chancellor)

It might not come as a surprise to learn that drinking alcohol is prohibited during sessions of Parliament. We imagine most Brits would prefer their lawmakers to be sober when making those important decisions!

However, there is an interesting exception to this rule. According to historic ritual, the Chancellor of the Exchequer (Minister of Finance) is the only member of the House of Commons who is allowed to drink alcohol inside the chamber.(9)

Maybe he needs to take the edge off when everyone is discussing budgets?

The next time you sip your favorite vintage, take a moment to reflect on the individual grapes that went into that bottle.

Winemakers will tell you it takes anywhere from 600 to 800 grapes to produce a single bottle of wine. This works out to 3 to 10 bunches, depending on the size and type of grape.

Have you ever tried to freeze a bottle of vodka (or another liquor) in your home freezer? Isn’t it fascinating that it gets super cold but never freezes solid?

Oklahoma has some interesting legislation when it comes to selling liquor, and they’re still in the law-making process.

At present, grocery stores can sell beer and wine every day of the week, including Sundays. The weird part? Liquor stores are still required to be closed on Sundays.

Go figure that one out!

15. Happy Hour Is (Still) Illegal in Massachusetts, Alaska, Indiana, and a few others!

Many antiquated liquor laws have been overturned in recent years, but Massachusetts hasn’t quite caught up yet.

Happy hour, or having more than one drink in front of you at once, is still illegal in the Bay State. But they’re not alone: It’s also still illegal in Alaska, Indiana, North Carolina, Oklahoma, Rhode Island, Utah, and Vermont!

We gave Ohio a hard time earlier for its silly laws, so let’s pick on Texas for a bit. In the great state of Texas, it’s technically illegal to consume more than 3 sips of beer while standing.

Of course, it’s also illegal to milk someone else’s cow or urinate on the Alamo, so we figure they’re just trying to take all the fun away!

So, which of these fun facts about alcohol surprised you the most?

Was it the glow in the dark gin and tonics? The 5-year old kids legally drinking in the UK? Or the fact that you can’t drink more than 3 sips of beer while standing in Texas?

Whichever fun facts jumped out at you, file them away in your memory bank. You never know when you’ll have the chance to amaze someone with these interesting facts about alcohol.

Dihydromyricetin (DHM) Side Effects – Everything You Need To Know

Is Milk Thistle Good For Hangovers?