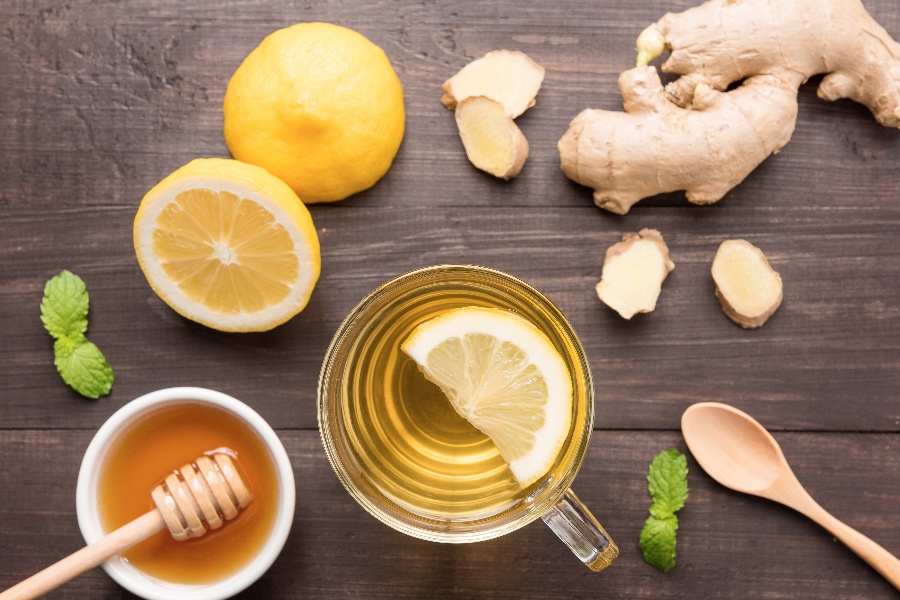 If you’re looking for the best tea to cure your hangover, you’ve landed on the right page.

There are teas that have science-backed active ingredients that can help reduce your symptoms.

In this article, we’re going to go through all the best natural herbal teas that can help soothe your hangover woes.

To understand which teas are good for a hangover, we first need to go over some of the ways drinking alcohol negatively affects your body.

The science behind hangovers is complicated and scientists believe there are many different factors that come into play.

Some generally accepted theories are:

Alcohol is broken down in your liver to produce energy. This process of breaking down alcohol produces toxic by-products like acetaldehyde. These by-products cause  “oxidative damage” and are responsible for causing inflammation in your tissues.

Furthermore, congeners in darker colored drinks are well-known to make hangover symptoms worse. This is because they fuel the inflammatory processes.(1)

Dehydration
Alcohol is a diuretic which means it makes you pee out more fluid than you are consuming. For example, every glass of wine makes you lose around 100ml extra water. If you add this up over several drinks, it amounts to quite a lot of water loss and dehydration.

Sleep disturbance
Studies have shown that drinking alcohol profoundly disrupts sleep quality. Although it’s much easier to fall asleep after a few drinks, the actual sleep quality is significantly reduced. This is because alcohol prevents you from reaching the REM stage of sleep which is responsible for making you feel fully rested.(2)

Ultimately, a combination of inflammation, dehydration and sleep disturbance results in your hangover symptoms. These typically include:

Unfortunately, once your hangover has set in, no tea is going to completely cure your symptoms. That being said, there are some which have medicinal properties that may help.

Next up, we’ll look at the best teas to try and help your body counteract the negative effects of alcohol. 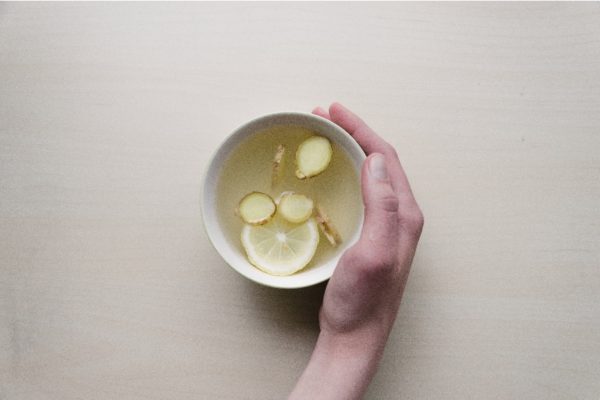 Ginger tea is one of the best options when hungover because it’s rich in antioxidants and has the added benefit of having anti-sickness properties.

Arguably one of the worst symptoms of a hangover, many people suffer from debilitating sickness after drinking alcohol.

In fact, doctors still recommend it first-line to treat morning sickness because it’s safe and effective.

Ginger tea is also super easy to make. Just chop up a few pieces and add to hot water and you’re done. Unlike other herbal teas, it’s a household spice that you’ve probably got in your kitchen. 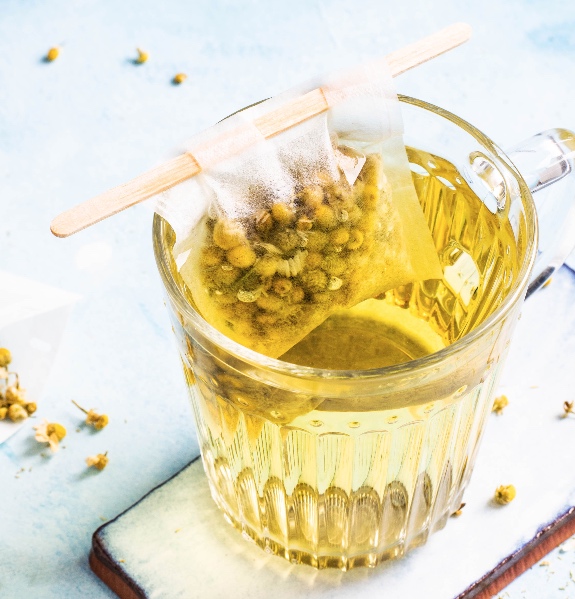 Don’t you just feel better after a cup of chamomile tea? Well, there’s a good reason for it.

Apigenin is the active ingredient in chamomile which is known to have a calming effect on your mind. For this reason, It’s been used traditionally to settle nerves for centuries.

Furthermore, chamomile has even been shown in small scale studies to help with anxiety symptoms.(4)

Hangovers are commonly associated with jitters and anxiety which is caused by the “rebound effect”. Alcohol is a nervous depressant that slows down your nervous system. Once the alcohol levels drop the zero in your blood, this system jumps back to life. Hence, where the “rebound” effect gets its name. 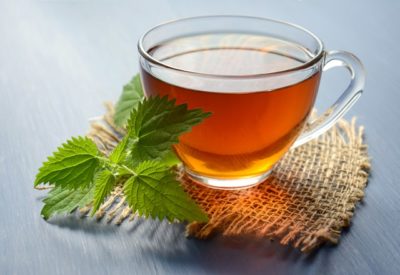 Peppermint and its extracts are traditionally used to settle upset stomachs. It’s even used as a remedy by doctors to help with colic in irritable bowel syndrome.(5)

Peppermint tea could be the right choice for you if you’re someone who gets abdominal discomfort during a hangover. 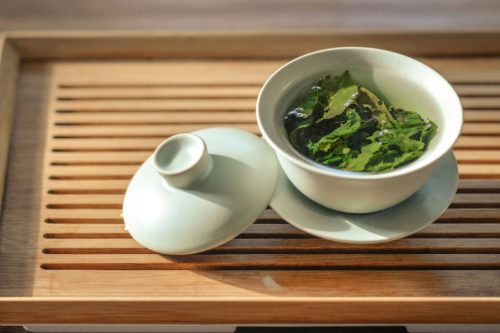 L-Theanine is an amino acid found in high concentrations in Green tea. Some studies have shown that L-Theanine has a calming effect on the brain because it increases alpha waves.(6)

It’s important to mention that green tea does have a high amount of caffeine in it which you may not want so much of when hungover. 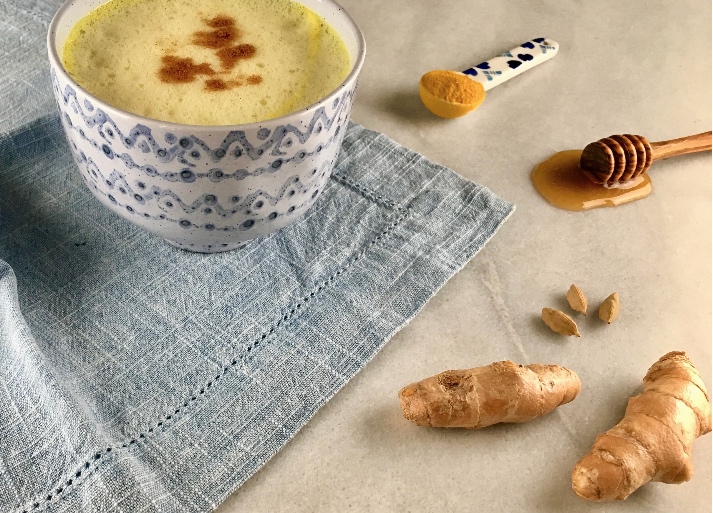 Turmeric infused drinks are becoming more and more popular nowadays because of the perceived health benefits of curcumin.

Several studies have shown that turmeric has anti-inflammatory properties. It’s for this reason you’ll see it sold in joint health supplements. Muscle aches and pains are a common hangover symptom, particularly if you’ve been dancing the night away in which case turmeric may be a good choice.

What about standard black tea for a hangover?

So, what about good old black tea with or without some milk?

The only thing to mention about black tea for a hangover is that it contains a reasonable amount of caffeine. Depending on how strong you brew your tea, it could contain the same amount of caffeine as half a cup of instant coffee.

Caffeine is also a diuretic which means it makes your kidneys flush out excess water. Therefore, it’s not ideal when hungover. In addition, it’s a stimulant that may make you feel more alert, but at the same time worsen hangover shakes. 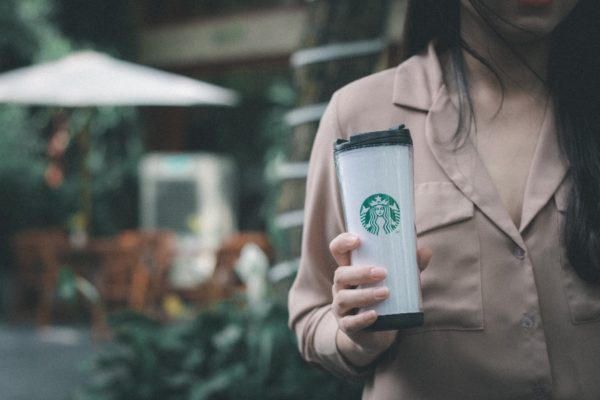 You’ve had a few too many at happy hour and have a hangover before work, we know the feeling.

If you’re looking for a tea to pick from Starbucks on your way in, there are many different options available to you.

Aside from your usual English breakfast tea, Starbucks has a selection of green and mint tea which we mentioned could help with your hangover.

Chinese herbal tea for a hangover

Aside from the popular teas mentioned earlier, there are a few less known Chinese herbal teas which are used specifically for hangovers.

The most popular one is Hovenia Dulcis (aka Oriental raisin tree). It’s active ingredients, Dihydromyricetin, has been shown in research studies to reduce hangover symptoms by speeding up alcohol metabolism and reducing alcohol’s rebound effect.

It’s so popular that a whole new range of hangover supplements are available on the market with dihydromyricetin as their key ingredient.

Hangovers are a sign from your body that you’ve probably had a bit too much for your liver to handle. Reducing your alcohol intake, keeping well hydrated and having a meal before going out is key to hangover prevention.

There are several herbal teas that you can try when hungover to ease your symptoms. Some of which have medicinal properties like ginger and peppermint.

Pepcid for Asian glow – Does it help the symptoms?